Why This Costume: My friends approached me about a group Borderlands cosplay last year. I hadn’t played the game at that point, and one of my pals suggested I go as Deathtrap to compliment another friend’s Mecromancer. Props and armor are definitely not my specialty (I’m starting to experiment, but I still have a ways to go), so I spent a while scouring for someone to go as. Once I started playing BL1 and BL2 with the BF, I knew I had to go as Lilith. Such a saucy character. Plus, she’s a total badass. I was also interested in uping the ante on my sewing (when I post my Korra notes, you’ll see why…), and thought this costume would provide me a good opportunity to do so.

How I Made It: This one took a lot of time and effort, so I’ll break it down into pieces.

The wig: One of my good friends who loves the wigs did this one for me (she hates sewing, so I sewed some of her Mecromancer costume as an exchange). Sadly, the wig started falling apart by the end of the day, so I made a new one. The new wig is a Magnum in Maroon from Arda wigs with Rose Pink wefts. 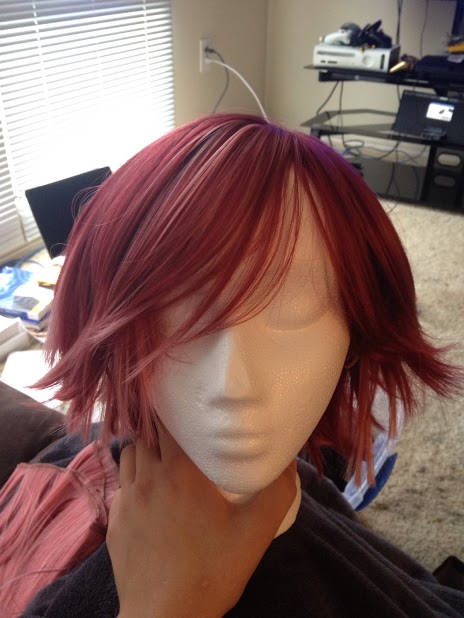 Neck piece: I had some trouble finding a pattern that I liked for the top of the neck, so I found faux leather and created some (the idea for this goes out to Nebulaluben). I created a basic grid on batting, then sewed it to the faux leather. To finish it up, I ran a stitch along the edge to make it look more polished and sewed in the neck cord. The whole process took about 2.5 hours. I used the remaining grid for the arm piece, and the leftover faux leather for a skirt.

The base of the neck is made of a grey vinyl. I created a muslin from scrap fabric with the help of a neck pillow pattern. Once I got the top piece cut out, I sewed on the grid pattern and then hand stitched on some buttons. I decided to attached the neck to the vest using velcro, so I created a double layer of the vinyl and stitched in some sew-in Velcro to the bottom of the neck base and to the vest itself. Once that was finished, I sewed the base pieces together, leaving the inside of the neck undone.

For the fur flap, I carved a mini-arc out of the remaining vinyl and sewed some fur trim to the underside. After putting in a few stitches to the vest to keep it all in place, I attached the fur piece to the inside of the neck and voila! I did put in some batting to give the neck some volume.

Vest: This was actually the first part of the costume that I completed. It was a pretty simple endeavor once I figured out what the eff I was doing. I modified a cardigan pattern I already had. Originally, I planned to go with a brownish fabric, but after screwing up the sides, fraking up the lining, and hating the color, I went with something else. The fabric I wound up using is some leftover grey linen one of my friends had. I got some fusible interfacing to stiffen it up and sewed on the front pocket, complete with Velcro (yup, it’s fully functional. I adore pockets). I used batting to fluff the whole thing up and lined it. It’s very comfortable and very warm (sadly, not great for Texas summers :P). 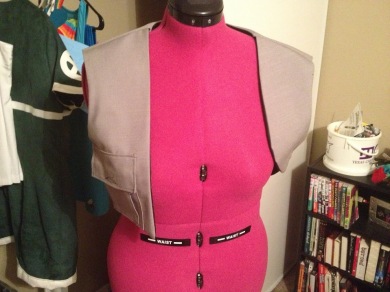 Top: I picked up a plain pink tank from Wal-Mart while I was out grocery shopping and played with it a bit. I shortened it up to just above the navel and used the leftover fabric to create the right sleeve and the layered look of the bottom. To create the illusion of seams, I drew lines with a thick Sharpie. Depending on how long other costumes take, I may revisit this again.

Leggings: I originally made some leggings using a Simplicity pattern, but I didn’t like the fit of them. After mangling the fabric (my cat knocked over my old sewing machine, so it couldn’t zig-zag stitch properly), I opted to modify some cheap grey leggings. And by modify, I mean cut holes in, draw on, and distress the crap out of them.

Chaps: This was a fun endeavor [insert sarcastic eye roll]. For the life of me, I could not find a pattern for cowboy chaps. Seriously, none. Instead, I modified my legging pattern. I found a reddish-brown vinyl that was decently priced for this. The pattern I used is designed for stretch fabrics, so my initial cut was a little small, particularly around my ginormous calves. I cut out long strips for the inside to accommodate. The sides of the chaps were extra long and I flipped them over to make belt loops. I used the remaining fabric for arm accessories.

Accessories: Oh, so many of these. I seriously started feeling like putting this costume on was like a puzzle. For the boots, I relied on eBay. I found a pair of military-style zip-up boots that come just below the knees. I LOVE THEM. I opted to go for grey since I thought I’d get more use out of grey boots (yay artistic license!) than brown ones. They magically match the neck-piece and have a kind of faded look to them already.

I used scrap fabrics for the arms pieces. The black from the neck piece really came in handy.

For the knee and shin guards, I did some experimenting with Worbla. I had some shin guards from my Taekwon-Do days, so I used them as a guide and traced them onto craft foam for my pattern. I followed Kamui’s tips in her breastplate tutorial: layer Worbla, craft foam, more Worbla, and heat together. I used my leftover Worbla for other costumes. I also attached the shin guards using Kamui’s other tutorials: lots of Velcro, rings, and straps. I opted to use more Velcro on the straps rather than create buckles.

I initially made foot guards from Worlba as well, but I couldn’t get them to lay just right. To fix that problem, I re-made them from the grey vinyl and sewed in elastic.

Protip for heating Worbla: Using a blow dryer is awesome if you don’t have a heat gun, but time consuming. Be prepared to burn the crap out of your fingers and potentially blow your breaker if you live in an old apartment.

For the tattered yellow sweatshirt, I just picked up a bit of yellow fabric and made a casing for 2” wide elastic. Distress, sharpie, and enjoy.

Tattoos: I’d never done body paint before and I’m a terrible free-hand artist, so for my first go, I opted to make temporary tattoos with Papillo paper. To do this, I located images of Lilith’s tattoos online, then spent several hours in Photoshop cutting out the specific images. Once all that was done, I saved it as a JPG and flipped the image for printing.

The result was terrible. I had a horrible reaction to  the paper and felt like my skin was on fire. I finally caved and washed it off in the bathroom, which I’m sure the maintenance staff *loves* me for. I’m not sure if I didn’t apply the tack properly or if for once in my life I developed an allergic reaction.

During my second go with this costume, I used Temtu in Frost. I free-handed the tattoo, so it took a couple of hours to paint on, but it lasted all day at Dragon Con. If/when I wear this again, I’ll take the time to cut out the images I have of Lilith’s tattoos for more accuracy.

Cell shading/distressing: This was yet another terrifying experiment for me. I kept procrastinating this because I was *terrified* to mess up my costume. Ultimately, I wound up running some sandpaper lightly over most of my costume pieces, spraying and smudging some heavily diluted brown acrylic paint, and then re-creating the lines from the game.

Thoughts on this costume: This has been the most intensive (mostly) solo project I have undertaken to date. I love all the new techniques I had to learn to create this costume and look forward to honing those skills. There’s still a few things I want to go back and fix before I wear it again,  but overall, I’m pretty pleased with the results. For the most part, it’s very comfortable. At the Dallas Comic Con, a random guy donated his gun for photos, which was cool. I also ran into an amazing Mad Moxxi, cosplayed by the lovely Enasni Volz as well as a Dr. Zed and Claptrap. Loads of fun.