Early in the summer, I finally caved and admitted that I needed to learn how to do a full-bust adjustment (FBA). For those of you who aren’t aware, most pattern companies (especially the Big 4) draft patterns with a B cup in mind. If you’re larger or smaller, chances are that you’ll need to adjust your pattern to accommodate.

Make it again?: Maybe. Not my normal style, but it’s a solid wardrobe staple.

Favorite parts: Aside from the FBA, how easy it is to put together. Seriously, two darts and 4 quick seams. Love.

Process: After struggling to create a successful FBA with my Ms. Marvel gown (did you guys know that Kwik-Sew pattern sizes accommodate different cups sizes? Mind blown), I decided to step back and try a FBA on a simpler garment: Colette’s (free!) Sorbetto pattern. The pattern only has two darts, so I figured it’d be a piece of cake. Well, my first three attempts were HORRIBLE. Like, “Go back to sewing pillows you crappy newb,” terrible. The first was basically a tent and the second was so tight I couldn’t wear a bra with it. Sigh. My third was passable (though never blogged), but it’s made of cotton voile and I hate ironing casual clothing. I think it’s been worn twice since I made it? Anyway, I trashed the first two abominations and blocked the travesties out of my memory until after I moved.

With this round, I attempted things the “correct” way. I printed off an extra copy of the pattern, actually took my measurements *with* my normal undergarments (I tend to wear sports bras the second I get home, which mush the ladies around differently), traced my adjustments, and made an actual muslin. I found this tutorial (as well as this one and this list of FBA tutorials) very helpful when figuring out how much to add. I erred a bit more on the side of caution and added a full inch to my adjustment. The end result is a teeny bit loose in the waist and hips, but not unwearable.

After doing cartwheels upon realizing that my FBA was actually successful (only kind of kidding), I made two real versions. The first is a cotton gingham with the center pleat and self-made bias tape. The fabric was an impulse purchase during D’or’s last fabric sale. I feel very Dorothy-esque while wearing it, so I’ll probably just wear it on weekends. Very likely out to the state fair in a few weeks. At least the blousiness will conceal fried food bloat!

Making the bias tape was the most time-consuming part of this blouse. Since I’m still not proficient, I took things slow, which added another hour to my overall sewing time (a whopping 3 hours).

My second Sorbetto is a mystery blend from Jo-Ann’s remnant section with pre-made bias tape. I decided against the center pleat for this one, mostly out of laziness. This one is simple enough for lazy dress work days. I can definitely see myself wearing it with my comfy trousers or another Mabel. Using the pre-made tape made this a super speedy project. I think cutting to finishing the hem took only 1.5 hours. 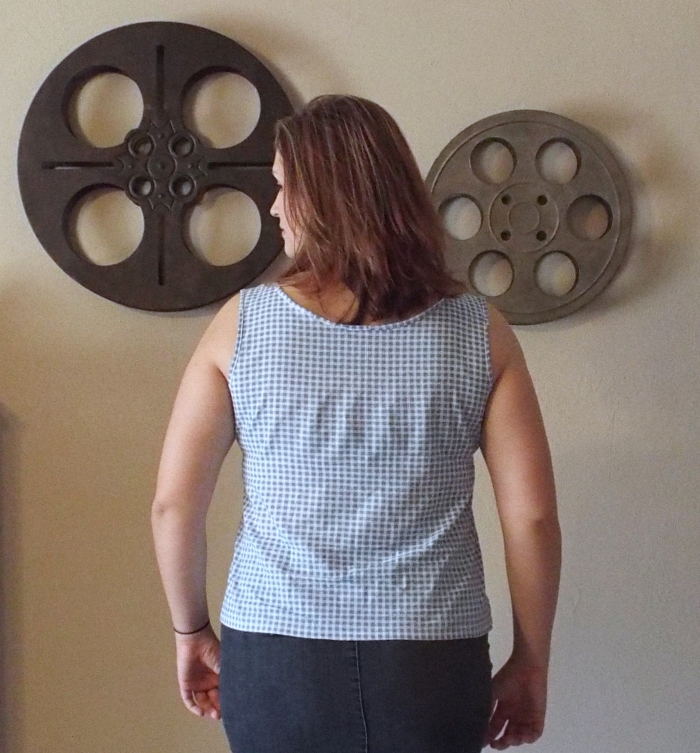 Other thoughts: Overall, this is a good basic blouse, especially for beginners (or beginner pattern modifications). You can keep it super simple by eliminating the center pleat and using pre-made bias tape, or you can be fancy and make your own bias tape, add the pleat, throw in some sleeves, embellish the pleat, etc. In future versions, I’ll definitely add another 2-3+ inches since this hits me a little higher than I typically like.

Have you made this pattern before? What are your thoughts on it?

16 thoughts on “Colette Sorbetto (or, my battle with FBAs)”