Why This Costume: I’ve been on the MHA hype train for a while (me and the hubs love watching it together), but I’d never really thought about cosplaying from it. That changed when Daydreamer Nessa asked me and the Cosmic Coterie crew if we’d be interested in joining her group for fun times at AX! I immediately started rewatching the series with the CC crew, but this time I actively started looking for characters I wanted to cosplay. And… well, Yaoyorozu is basically my cosplay type: blunt, scholarly do-gooder and as an added bonus, she’s tall. So yay! 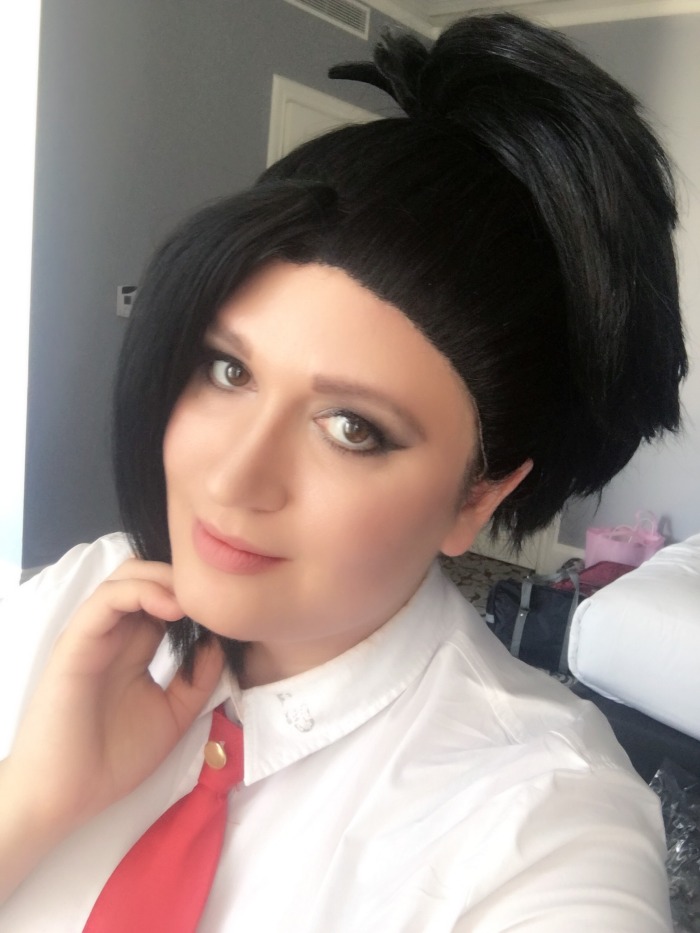 It should be pretty clear by the pieces listed above that I didn’t actively make anything from scratch on this build. I chose to keep life simple for myself and throw money at it since I had WAAAAYYYYY too much other work going on leading up to AX.

I ordered a tailored uniform for our group order rather than standard sizing and the fit was way better than I expected! Truthfully I was expecting to have to take the whole thing apart and re-sew it. The only thing I needed to tweak in terms of fit was shortening the skirt by about 2 inches. Because what are proportions in anime?

There are a few other things I’d like to do to this costume after wearing it at AX. I plan to replace all the buttons with sturdier ones, since one of my shoulder buttons snapped in half at AX. I had reinforced the stitching on these prior to AX, and amusingly enough it was just the top part of the button that snapped.

I’d also like to purchase or make a better tie, since the fake one included with this uniform has a zipper that broke on mine. Eventually I’d also like to actually cut off the excess hem on my skirt and use the fabric to convert the top to one that also works for the summer uniform. But, those are all things that can be addressed over time.

Thoughts on this costume:

The materials on this uniform aren’t the greatest (everything down to the shirt is made of what feels like poly poplin), so I don’t expect it to last forever, but for a comfortable, stress-free and fun costume, it’s a great option!

Also, keep in mind that it’s perfectly fine to purchase costumes if you don’t have the skills, time, or desire to make a costume. I really dislike making seifuku. Basic knife-pleated skirts get boring to me after a while, so I was thrilled to have a costume that required only minor work.

The only thing to keep in mind with purchased pieces, whether it’s coming from a company or a commissioner, is to be sure to not take credit for work you didn’t do, implicitly (by not crediting) or explicitly (saying you did work that you didn’t do). Keep that in mind and  you’re golden! ❤

Do you tend to make or purchase your costumes? Which do you prefer?