Oh, this skirt. It started off so, so well. I was so excited to have a skirt to post to the Monthly Stitch Collective. And on time!

This month’s theme was “New Year, New Skill”. My primary new skill with this skirt was to install a lapped zipper, which turned out okay. 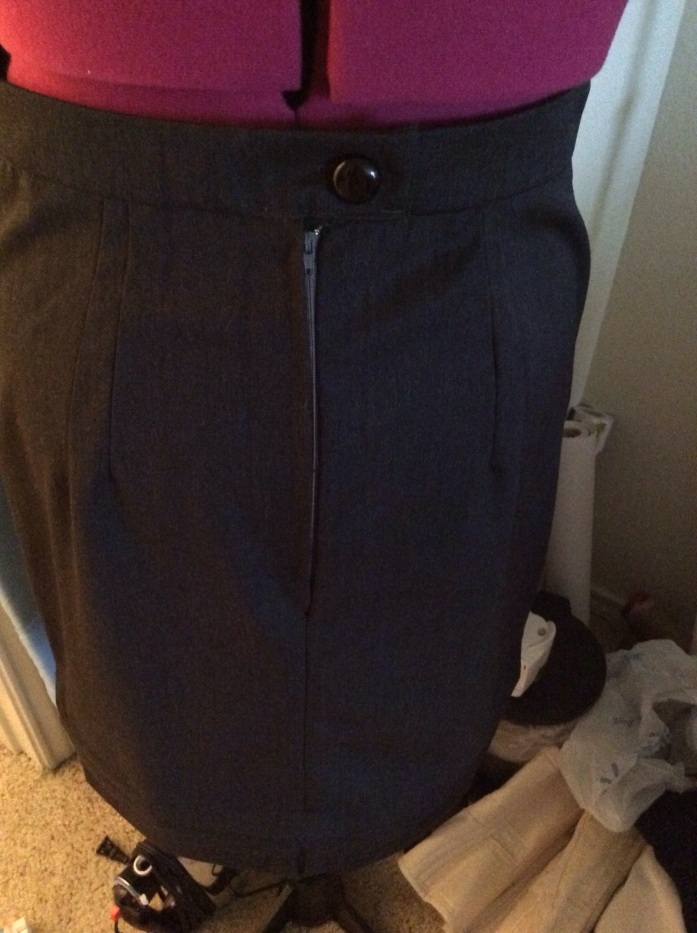 My problem was that when everything was said and done, I nicked a small hole in the center front of the skirt. Ugh. More on that after the pics.

Quick aside: Have you guys heard of Scruffy Badger? Well, she’s awesome. I discovered her via Tasia’s blog, when she posted a bunch of Renfrew tops with wigs. I am ashamed that as a cosplayer, I did not think of this. So have some pencil skirt with my Rogue wig and corset. Because why not? (Corset by Castle Corsetry, BTW. I absolutely love this thing)

Time: I honestly have no clue. Those pleats took freaking forever.

Make it again? Yes, though I think I’ll go for a bold color. I’d love to try some of the alterations mentioned in the book, like lining it and adding boning to the waistband.

Favorite parts: Overall fit, the waistband, and the pleats.

After I had a minor freak out upon discovering the nicked spot on the front of the skirt, I decided to iron some interfacing over the hole and add horizontal pleats (inspired by Colette’s Pastille dress).

By the way, thank you everyone for the wonderful ideas! I thought that adding the pleats would be the easiest and most time efficient options. Ha! Oops. The Pastille dress is actually on my to-make list, so I’ll keep that in mind when I do get around to making it.

I like the overall look of the pleats (even if they took a million years), but it brought the skirt up a little shorter than I would have liked. Still work appropriate, but I don’t think the super high waistband really works as well. More than likely I’ll wear tops untucked with this skirt.

The back also looks a little odd. The Pastille dress has an invisible zipper and no slit as far as I can tell. I’m decided to just tack it down and move on with life. I’ll have to see how much it bugs me when I wear it to work. On to the next challenge: trousers!