Why This Costume: I’m pretty sure my love of Rogue is obvious at this point. This version of Rogue is one of my favorites. I had the base costume pieces already (the bodysuit is by Meredith Placko and the jacket pattern is from GSTQ Fashions), so I decided to revamp a few things and make some improvements.

How I made it: The pieces I altered for this version are the wig, the patch on the bodysuit, the belt, and the boot covers.

The wig is a combination of two Ferraris from Arda. I snipped the crown of the white and brown wigs off and stitched them together to form one wig. You can see my post on the process here, or check out this tutorial from God Save the Queen Fashions.

In my last go at the bodysuit, I cut black spandex to form the patches. That didn’t work out as well as I would have liked, so I cut off the X “patch” and replaced it with an actual embroidered patch from Etsy. Of course, I decided to do this a week before the con and my patch got in on Friday. Awesome planning.

The belt was kind of a fly-by-the-seat-of-my-pants process. I had about a yard of leftover jacket material, so I cut two wide strips and sewed them together. I stuffed it with batting and then just top-stitched the detail with a teflon sewing foot. 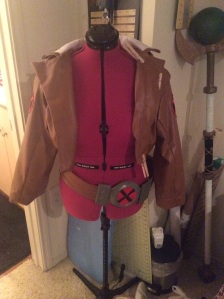 The buckle was another purchase from Etsy. It was sold as defective, so I just sanded it down in a few rough spots and painted over it. The other belt pieces are made from scraps of Worbla. All of the pieces are attached to the belt with Epoxy. I also made a quickie utility pouch so I wouldn’t have to dig through my purse for my phone!

For the boots, I took my old boots, tore them apart, and rebuilt them. The stitching in the front and back was starting to wear, so I reinforced that. I also made new boot toppers and replaced the green stripes with black.

Pro-tip on Rogue boot toppers: If you want them to stay up, line them with craft foam! Just be sure to set your machine to a longer stitch. Otherwise you’re basically slicing the foam to itty-bitty pieces and making your machine super pissed.

Makeup: I went a little over-the-top with this makeup, but I think it turned out okay. I knew I wanted red lips with this, so I used more neutral tones around my eyes and on my cheeks. I also wore false lashes. The contacts are from PinkyParadise.

Thoughts on this costume: This is by far my best version of Rogue and I’m really happy with it. I’m going to leave this one alone for a little while so I can work on a new Rogue costume. In the future, I want to remake the jacket and belt, now that I know what I’m doing. Maybe with actual leather!

My boots are going to need a touch up soon. I wound up walking all over the place in them and the spandex is starting to wear down quite a bit. I may just snip of the heels and wrap my shoe heels in leftovers.

I’m also super happy that I got to do two photoshoots! One with Aperture Ashley and one with Hell or High Water Photography. I’ll update this post when I get those in. You can see other fun shots of this costume on my new Facebook page! I’ll also post some pics of the con to my Tumblr and Facebook over the weekend.