Why This Costume: This costume was partly a matter of convenience, partly a matter of wanting to cosplay with Callula, and partly a nudge from everyone and their dog. As I mentioned in my last post, I was out of the country for a week on vacation at the beginning of October, and I knew I wouldn’t have much time to finish up a full build for Fan Days. I loved the Deadpool movie, but wasn’t really sure who to cosplay. I think at least half a dozen people suggested I make Angel Dust before it actually clicked in my head that I look like Gina Carano’s character. And as an added bonus: it was pretty simple to make! 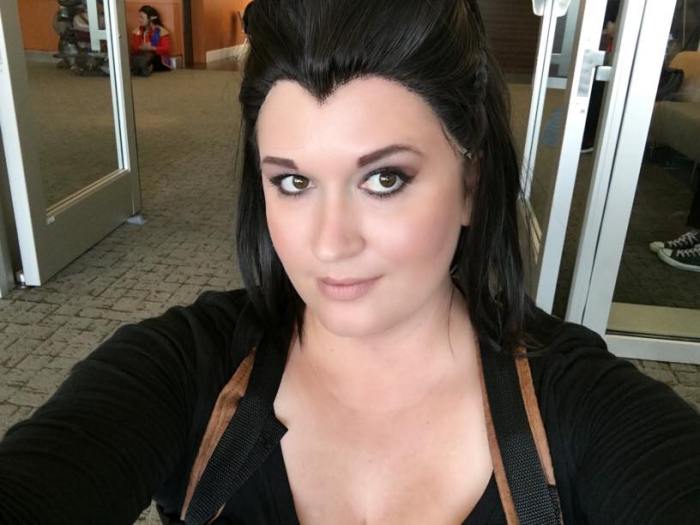 How I made it: All in all, this is a pretty simple build. I bought all the pieces and modified the corset, top, and belt to be more film accurate. 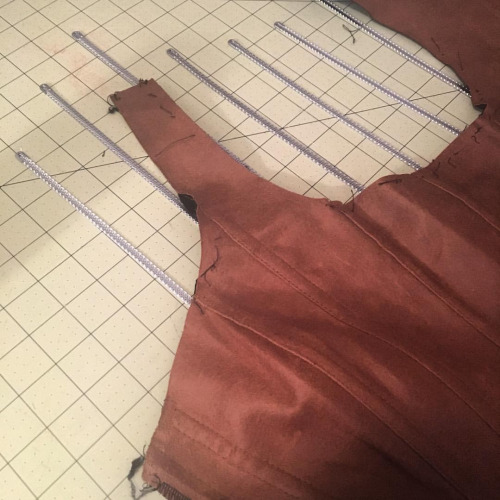 The corset was definitely the most time-consuming piece of this costume. This tutorial from Lucy’s Corsetry was a massive help with this project. I compared it to my Wonder Woman overbust corset and marked where I needed to cut. From there, I seam ripped the binding, removed the boning, and cut the corset down to the right shape. Once that was done, I cut the boning down to the new length, re-tipped it, and put the boning back into the appropriate channels. I used the excess fabric to make the straps and I used faux leather scraps from Lulu to make the bias binding, which is also what I used for the diagonal stripes. A lot of reviewers on Amazon complained about the sturdiness of the zipper, so I tore that out and replaced it with a heavy-duty zipper as well. I also swapped out the lacing for black parachute cord. Finally, I stitched some 1″ black webbing I had on hand to the center front of the corset and to the straps.

The only other part of this costume I had to sew was the shirt. I didn’t think to purchase a shirt before my cruise, so I picked up 2 long-sleeve crew neck shirts at Wal-Mart for $5 a piece. I marked where I wanted the neckline to go, cut it off, and made a neck band out of my 2nd shirt. I also cut off the sleeves to 3/4 length and made bands from my second shirt to finish it off. 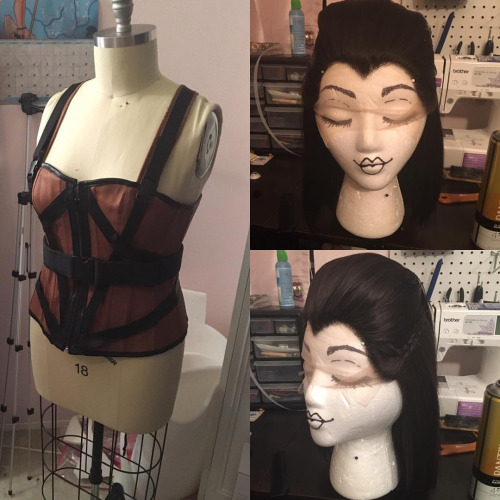 I styled my wig much in the same manner as my Captain Marvel wig: tease, hair spray, blow dry, and repeat for crazy volume. Though the braids are film-accurate, I think I’ll remove them for future wears as the side burns of the wig don’t come down quite far enough on me.

Thoughts on this costume: This might be one of my comfiest costumes to date! Even though a lot of people had trouble recognizing my costume, lots of people thought it was cool and I had a ton of fun derping around with Callula and trolling Deadpools. Next time, I’ll pay a bit better attention to my shapewear (my silhouette wasn’t quite what I was going for), shorten the straps a touch, and tweak the wig a bit. Otherwise I had a lot of fun with this build!