Why This Costume: I mean… I’m pretty much obsessed with this game and still have a ton of plans for future P5 builds, especially with Koholint and AdventTraitor. I was so giddy when Atlus announced a stand-alone dancing game with new designs. I love this dancing version of Makoto and prefer it over her DAN DLC design.

This build was super simple. It’s borderline closet cosplay to be honest, especially since I’d already made Makoto’s skirt, though eventually I want to remake mine using some tips my Cosmic Coterie teammate Victoria Bane shared with us.

I pulled most of this together over the course of a few days. To start, I grabbed a pair of base boots I had in my closet from a Tifa costume I never got around to. I stripped the varnish and repainted them with a combination of Scarlet and Autumn Red Angelus leather paints. It took several layers to get to the shade I wanted, and once my final layer dried, I sealed the boots and swapped out the red laces for black ones.

In between my shoe painting, I also hit the shirt. For ArlingCon, I bought a basic grey shirt off of Amazon along with Jacquard paint. I literally dipped a brush in the paint jar and just went to town splattering the paint everywhere. The bigger splotches needed a full 24 hours to dry, and once that was done, I followed the manufacturers directions and heat set the paint on the reverse side of the fabric. Once the dye was dry and set, I took my fabric shears, cut a few openings in the shirt, and covered them in safety pins. 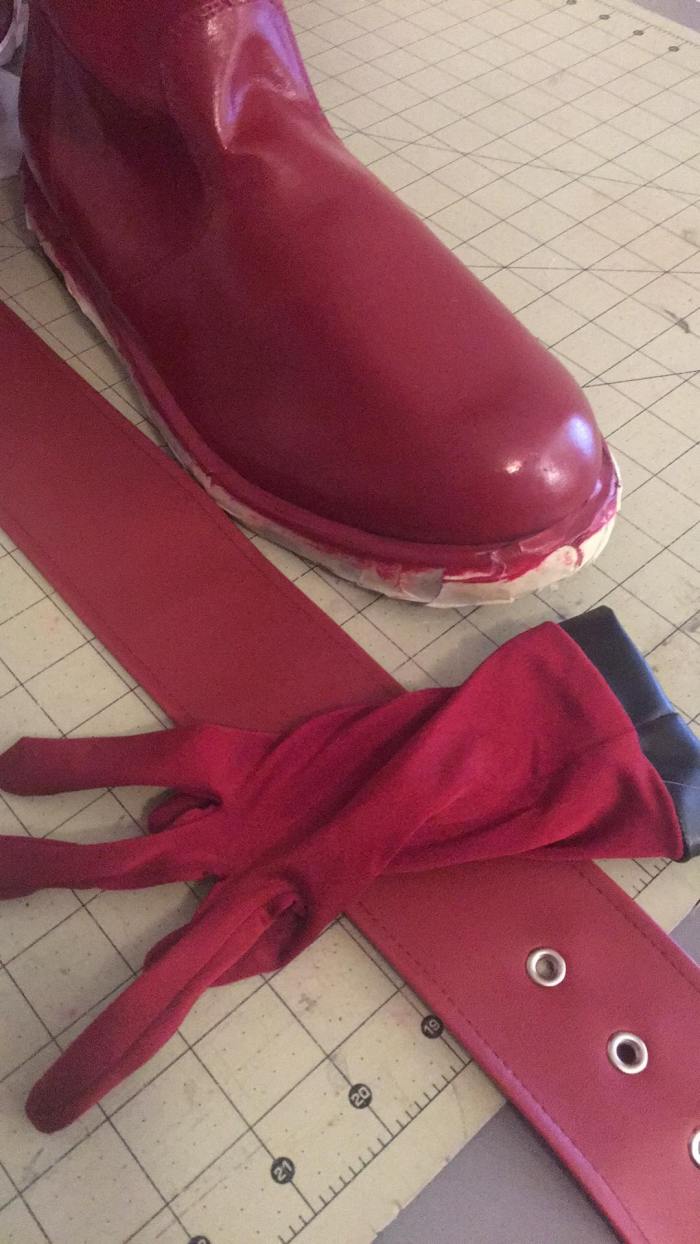 To create the gloves, I grabbed a pair of white wrist gloves from We Love Colors and dyed them with red iDye Poly. You can definitely use a pair of red gloves from them instead of dyeing, but I was mostly working with what I had on hand (huehuehue). I’ve covered dyeing spandex before, so I won’t address that here other than to say IT DOES NOT TAKE LONG TO GET THE COLOR YOU NEED. Seriously, I left the gloves in the dye pot for a minute and they’re still a little darker than I’d like. I wound up washing them 3 times before calling it quits and I still got red dye on my hands after a full day of wearing them. After dyeing the gloves, I grabbed a scrap of stretch vinyl and created a band to attach to the top of the gloves. Pretty easy and quick!

For the arm band, I cut a rectangle on the bias of some red satin and gave it tapered points. My original intent was to have it as a single layer of fabric with a machine rolled hem, but then I decided to fold it in half and just stitch it up that way (much like my Ms. Marvel sash).

Truth be told, the belt was the biggest challenge I faced with this build. I needed something that fit my low hip rather than my waist, and I had trouble finding something on Amazon that didn’t cost $50+. I thought I’d be thrifty and make my own belt, but 3 columns into studding it by hand and I gave up. Instead, I hit my local Hot Topic, bought two belts, and spliced them together using contact cement. I made sure to cut carefully and overlap sections where the studs would disguise my hacking. It’s not the most elegant solution, but it works for this costume!

The rest of the costume was pulled together from pieces in my closet, including the stockings and garter belt I used for Lulu.

I had such a fun time with this costume! It’s a fantastic summer outfit with the skirt and t-shirt combination. I do have a few pieces I’d like to tweak as I mentioned above, but it’s such a chill costume that I honestly don’t mind if I take my time (huehuehue) with those updates. This will be a great costume for judging and chill con days!

Do you have a favorite closet cosplay?