Why This Costume: I think every Moonie has that one sailor scout that they identify hardcore with. Jupiter was that senshi for me. I won’t go too in-depth here, because my fangirl love of Jupiter is absolutely absurd and I will start crying big fat ugly non-magical girl tears and no one needs to see that. Instead, have her bad ass intro from the original anime series. Also, this post from the new Sailor Jupiter voice actress expresses my feelings on Jupiter perfectly.

How I made it: It takes a village to make a fuku. Seriously. I wouldn’t have finished this project if it weren’t for a plethora of other sailor senshi cosplayers that took the time and energy to share their knowledge. Also, apologies in advance for the wall of text. I really underestimated the challenge of this project, so hopefully I can save some future senshi a few headaches!

The base of this costume is made using Katherine Zan’s sailor senshi pattern. I originally tried adjusting the Green Pepper Crystal Lake pattern, but it didn’t work out for me. I did have to make a few adjustments to Zan’s pattern, though. The sleeve portion (made with folded over foam from Zan’s store) was far too large for me, so I cut it down two sizes. The pattern is a bit short in the torso as well. I didn’t mind the torso length overall, since I like the 90s high-waist look, but it did bug me in the bloomer department. For future fuku, I’ll add probably 2″ to the bloomers at the hip.

Speaking of the bloomers, I’ll go back to the folded over elastic method for future fuku. Elastic finishes (which are covered here and briefly in the Cupcake Cosplay tutorial) prevent the leo from riding up the bum. And nothing says NOT A MAGICAL GIRL like leotard wedgies :P. I do like the double layer of fabric Katherine’s pattern calls for since it creates a lining, so I’ll have to play with combining both methods for future fuku. I finished off the crotch with hooks and eyes since I don’t trust snaps for such a high stress area.

I used Zan’s pattern for the collar as well, but instead of sewing it to the leotard, I made it a separate piece and attached it with snaps. I used NyuNyu Cosplay’s tutorial for guidance.

For the skirt, I combined two full circle skirts together and pleated them, as described in Cupcake Cosplay’s tutorial. Attaching the skirt, bloomers, and hip/waist roll is an ugly, clunky process, so be careful. At various points, you’re sewing through at least 9 layers of fabric and foam. I got a little sloppy at one point and my serger actually ate through a chunk of the roll on the right side. I covered it up as best as I could with my hip chain and con badge.

NyuNyu mentioned somewhere (don’t ask where, because I can’t find it now) that she used upholstery piping for the hip roll. One of my friends tried this approach and her hip roll was fantastic! I’ll take this approach for future fuku. I finished the skirt with a narrow hem.

For the bows, I used SparklePipsi’s bow tutorial. Perfect magical girl bows! If you’re wondering about sizing, I made no adjustments to the bow size whatsoever and I’m 5’11” with broad shoulders. You may want to adjust for your preference and size. I used 5 snaps on the front bow and three on the back, though I’ll go back and add more snaps to the back since it got droopy as the day went on.

I made my glove toppers using NyuNyu’s tutorial. I had to play with the measurements a bit, but I’m pretty pleased with how they turned out. I hand tacked them to my gloves, which are from We Love Colors.

I absolutely *had* to make Jupiter’s hip chain from the manga. Fortunately, this cosplayer had a great tutorial. Instead of using paper clips, I used straight pins and small split rings to connect the larger rings. If you do this, invest in a set of split ring pliers. It will make life much easier. 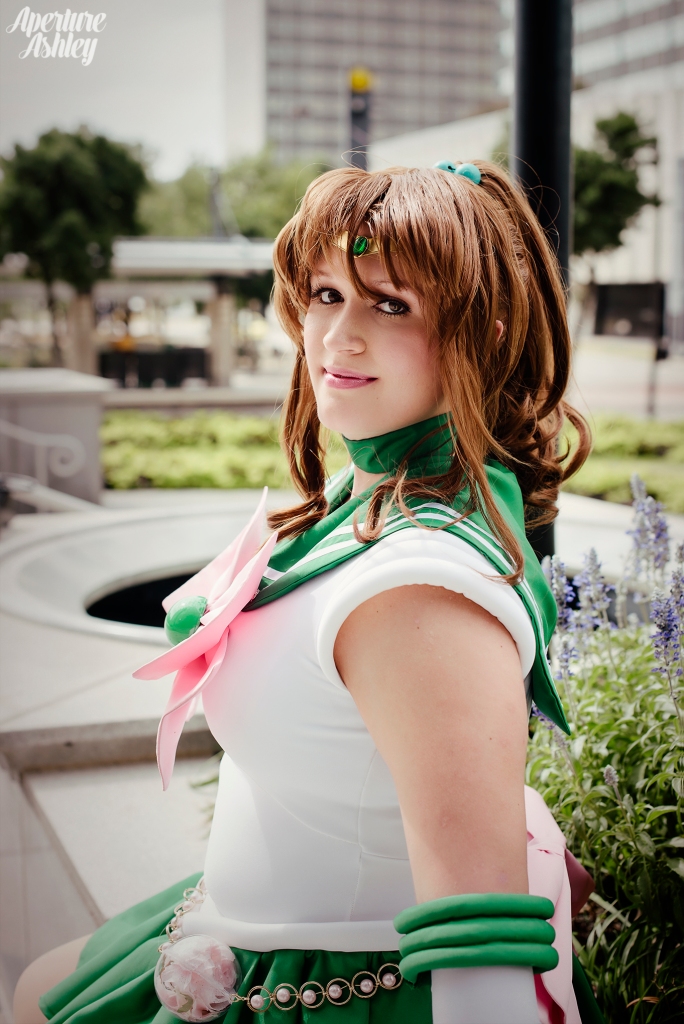 To make Jupiter’s hair tie, I painted two large wooden balls and attached them with a bit of black elastic.

My boots, brooch and tiara are from Catzia’s Collectibles, and I got my earrings from etsy. The boots and tiara are great, but I’d like a larger resin brooch at some point. Arda didn’t have the shade of brown I needed, so I went with my back-up: Epic Cosplay. I actually prefer their ponytail wigs to Arda now. While I love Arda, their ponytail wigs have a ridiculous amount of fiber, which makes wearing the wig really difficult and painful. I still had to sew in two toupee clips to this wig, but it was manageable. Still painful though. I was popping ibuprofen for a while. I styled my bangs using this tutorial and added a clip-in curly ponytail.

For my makeup, I went with a softer look and used this tutorial for inspiration. I went a bit darker than suggested for my photo shoot, used false lashes, and wore pink lipstick.

Thoughts on this costume: This is one of my favorite costumes to date. I have such a stupid love of Sailor Jupiter and getting to cosplay my favorite senshi is a costume dream come true. I do have a few small tweaks that I’d like to make, but overall, I’m ridiculously happy with how it turned out. I can’t wait to make Princess Jupiter!

The rest of the photos from this set are on Ashley’s flickr and will be up in my Sailor Jupiter album soon!